By Roger Heppleston May 9, 2019 July 27th, 2019 environmental transformation
No Comments 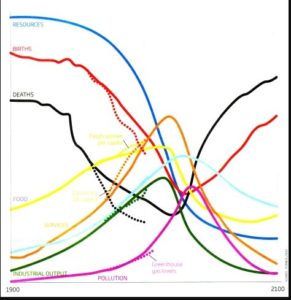 According to evolutionary theory, every animal species increases in population until it reaches its environmental limit. It appears that the human species will reach its limit in the twenty first century. The negative effects of climate change and pollution on human activity are well known. The UN commissioned report on biodiversity, published this week, reminds us of the dangers due to the loss of wild nature. We humans are destroying the eco-systems that support us, both in the oceans and rivers, and in the forests and savannahs.  Despite the extra intelligence and ability of our human species, we are proving to be just another dumb animal pursuing our own self-interest irrespective of the long-term results.

There is only one way to escape evolution’s driving force and that is to co-ordinate action globally. If people around the world make the right changes to their lifestyle, we can escape the downsides of growth.  The scientists know what needs to be done. However, there is little sign of the public at large recognising the critical nature of the problem or placing much urgency on resolving the issues.  Indeed, joint action is becoming more difficult, for as resources diminish, competition to control them increases. Populism is on the rise.  Instead of co-operating with each other we are reverting to tribal instincts. Rational decisions for the common good are being undermined by nationalist self-interest.

Somehow, we need to put the importance of our children’s future ahead of short-term selfish actions. We need to adopt a new way of life that puts sustainability at the centre of its moral purpose.  Maybe Greta Thunburg has shown the way forward. Perhaps the cries of our children will prick our moral conscious and stop this generation from destroying the planet.