By Roger HepplestonOctober 8, 2021Uncategorized
No Comments 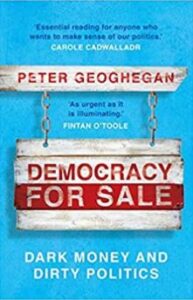 All communities, except self -sufficient farmers and hunter-gatherers, have to rely on the acquisition of wealth for survival; companies sell goods, states levy taxes and families depend on wage earners. Communities that provide a service to their members, such as charities, member-owned golf-clubs and religions, rely on membership subscription. How this membership subscription is gathered, matters.

To ensure they serve their communities, Buddhist monks are not allowed to own personal wealth.  In villages in Laos, monks collect food in begging bowls from local villagers. In return they provide education to the children and religious support to the village. Just like all non-profit making communities, those that provide the funds are entitled to have a say in its running and enjoy some of its benefits.

There was a time when the main source of political party income was member subscription. Quite early in the twentieth century the Labour party became excessively beholden to trade-union funds. As a result, the trade-union political agenda had a large influence on Labour policies. Similarly, the Conservative party became more dependent on business donations, and wealthy business men who funded the party gained access to ministers and were rewarded with honours. Both developments  eroded the influence of the general membership over party policy and gave a small number of individuals outside government a say in the way the country was run.

In the last three decades there has been a trend for right-wing parties to rely increasingly on income from a few rich individuals. These individuals are libertarians who want low taxes, minimum state control and are against all forms of cross-community support. This happened first with the Republican party in America and is spreading to Britain. Peter Geoghegan in his book Democracy for Sale tells the story about how this occurred during the Brexit debate and its aftermath.

This trend towards a few individuals having an excessive influence on the Conservative party has accelerated under Boris Johnson’s leadership. We now live in a country run by ‘Access capitalism’, where the rich pay money to get the ear of the Prime Minister. The Pandora Papers ( https://www.theguardian.com/commentisfree/2021/oct/05/access-tory-party-tycoon-funders-pandora-papers)  have recently revealed the extent to which the Tory party is beholden to off-shore funds from Russian oligarchs, corrupt business men and tax exiles. We now have the situation in which Boris Johnson, no longer reliant on funds from British business, is now blaming his former partners for the post-Brexit difficulties the country is now facing. At least in the old days trade-unions and businesses were British based organisations who had some interest in the health and wealth of Britain as a whole. We now have the situation where a few non- residents and foreigners are manipulating British policy for their own interest. The health of democracy in Britain has reached a new low ebb.

The Future of Capitalism

The Future of Capitalism