Evolution drives change in the natural world. Human ‘progress’ is also an evolutionary process. It is driven by competing individuals and communities all trying to obtain wealth and improve their way of life. As a species we have been spectacularly successful. However, all species have environmental limits to growth. With the effects of climate change, environmental destruction, dwindling water supplies and pollution beginning to bite hard, it is clear that human activity is now approaching the limits that the Earth can support.

Humans are unique animals; we can reason and we understand many of the laws that determine the workings of the universe.  Scientists have been warning for decades of the perils of climate change. Many people believed them, but the issue was too big for individuals to tackle and too nebulous for them to demand action from politicians. I naively thought that when the adverse effects became clear and obvious that attitudes would change. That the human race would see climate change as a genuine emergency and begin to tackle the issue with urgency. 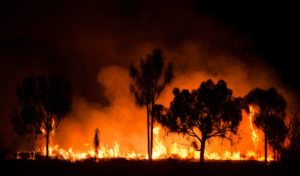 I was wrong. Images of Australia burning seem to have little effect. You’d think that Australians, in the front line of catastrophic droughts, floods and fires would, by now, be demanding that their government front up to the problem. You’d be wrong. Writing in the Guardian Lenore Taylor reports:

… despite the widespread sense that the fires are a tipping point, despite global outrage at the self-defeating stupidity of our policies, despite the world’s largest fund manager ditching thermal coal, despite the wave of grief and anger from around the world – even from James Murdoch – it’s still not clear that Australian public opinion will force this government to change.

How bad does it have to get before we act? It is already clear that the global temperature rise will surpass the 1.5-degree target set in the Paris Climate Change accord in 1916.  We are certainly on course for at least a 2-degree rise. Will we act when the rise exceeds even this? For the first time I am beginning to have my doubts whether the human species, despite all its cleverness, is capable of altering the path of evolution