Liberal Humanists need to rally to the cause

Democracies the world over are in deep crisis. Evolution is accelerating bringing huge challenges to advanced societies.  Issues resulting from an aging population, globalisation and new technologies have not been faced; the crises resulting from climate change, pandemics and immigration are piling on additional pressures. Nowhere is this democratic failure felt worse than in the USA.  Decades of political paralysis between the Democratic and Republican parties has resulted in a hugely discontented electorate.

Legions of Trump supporters are turning the Republican party against democracy. Republican Senators and Congressmen are lining up behind Trump in his rejection of the presidential election result. They are condoning his encouragement of rioters who marched on Congress and built gallows for those politicians who stood in their way. According to Johnathon Friedland writing in the Guardian, surveys show that 30% of Republicans say that “true American patriots may have to resort to violence in order to save our country.” https://www.theguardian.com/commentisfree/2022/jan/07/trump-biden-republicans-election-lies-midterms One of the cradles of modern democracy is in danger moving towards authoritarianism and civil conflict.

With their rejection of democratic processes, the Republican party now represents the antithesis of liberal humanist values. Rational judgement is being replaced by patriotic fervour. Egalitarian policies that help the less well-off are being set aside. Freedoms for women, immigrants and the poor are being supressed. Despite all the recent physical proofs, climate change is still being denied. Their rejection of international co-operation in favour of a narrow view of ‘America First’ nationalism would be disastrous for confronting the coming environmental crisis. 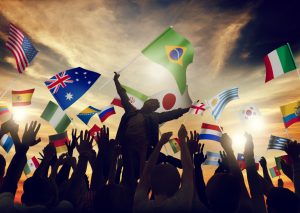 The old political divisions of left and right are now no longer so important. People have a critical decision to make as to whether they support democracy and liberal humanist values or not. Decades of progress in the health and wealth of citizens of the advanced world are under threat. A battle is coming up for the heart and soul of the electorate. Liberal humanists need to recognise the danger and to rally around the cause. Rejection of liberal humanist values in favour of a narrow tribal nationalism would be disastrous for international co-operation, the environment, and the future of our children