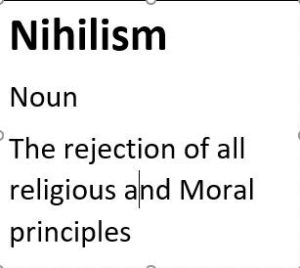 Now that the effects of global warming are becoming apparent to all but the most diehard climate change deniers, we have to come up with a word that describes people who refuse to countenance any change to their lifestyle knowing full well the consequences of their actions. Gaby Hinsliff writing in the Guardian suggests the term climate nihilists.

[Climate] nihilists don’t necessarily deny the planet is frying but, essentially, they refuse to feel bad about it; they want their sunshine holidays and their 4×4’s, come hell or (possibly quite literally) high water, and screw anyone who gets in the way.

Most people see the moral imperative of preserving the planet for their children, but they naturally demur when asked to make major changes to  their lifestyle by, e.g.  stopping eating meat or foregoing a foreign holiday. However, their actions tug a little at their conscience, and perhaps with more inspired leadership they could be persuaded to change course. However, there is a group of libertarians, who proudly reject any idea of curbing their behaviour for the good of others. They are devoid of common humanity and dangerous to the rest of society. We need to label them as climate nihilists and expose their moral corruption.

How can it be morally justified to risk the future lives of our children? The biological purpose of human existence is the preservation of our species, and yet somehow the threat of climate change doesn’t register as an overwhelming moral issue.  Religious authorities are supposed set moral standards, and yet Evangelical religions and the Catholic Church are much more concerned with today’s unborn children than worrying about the prospects for future generations. How can this be so? 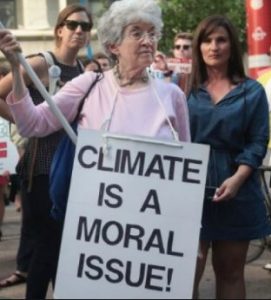 We are suffering a crisis of moral leadership. Our religious and political leaders are overwhelmed by their own issues born of past events. No one is looking at the big picture or is statesman enough to  to lead us safely through the year’s ahead.

We have been told that we should cut back on flying and eating meat if we are to have a chance of reducing carbon emissions to zero. If we had leaders who exercised moral authority and showed their commitment by changing their own lifestyle, then perhaps the public at large would follow.  Right now, we seem to be stuck in a moral abyss and drifting towards ecological tragedy. 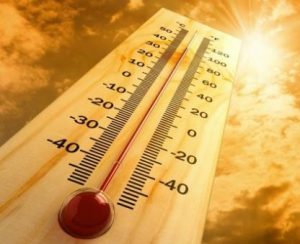 With extreme temperatures being reported across the world, this could be the year when the public at large finally believe that climate change is happening. Belief is one thing, doing something about it is another. The first reaction seems to be to cope rather than to address the fundamental problem. In the UK we are talking of installing air conditioning into our homes and workplaces. This will only make matters worse.

This is just the beginning; as we continue to pump green house gases into the atmosphere, temperatures will rise further. We need preventative action now if we are to mitigate the worst effects of climate change

Defeatism in the face of climate change

The world is sweltering in a massive heat wave causing wildfires, drought and distress. The scientists told us this would happen if we didn’t cut back on the emission of greenhouse gases. Climate change is happening before our eyes and, so far, little has been done to prevent the continuing deterioration of the biosphere.

But where is the anger and alarm? There is a Dad’s army mentality around of muddling through. It seems the human instinct is to accept what is happening and make the best of it. We seem to be prepared to accept the direction that evolution is taking us. This is defeatism. We can only preserve the planet if we insist on sustainability as a critical moral principle and develop actions accordingly.

Only when the public response to heat waves is outrage rather than passive acceptance will we begin to mitigate this impending disaster.

The Paris Climate Change Conference appears to have been an exercise in face-saving by politicians. After the disaster of the Copenhagen Conference in 2009, diplomats seem to have thrown in the towel.  They have realised that the issue of reducing global carbon emissions is impossible for politicians to resolve; there are simply too many vested interests at stake.

The resulting agreement recognised that climate change is an issue that needs addressing but left it to the conscience of each nation to devise their own programme. There were no targets, no recommended technologies and no binding timescales. The ‘aspirational’ aim of limiting the global rise in temperature to 1.5 degrees, shorn of any concrete programme of achievement, is simply dishonest. We are already at 1 degree above the pre-industrial level.

The worst act of the Conference however was to congratulate itself on its final resolution. They have criminally given the impression that the world has an effective programme to combat climate change. The implied message was that people can relax, the worst aspects of climate change will be avoided. The reality is that nations of the world are continuing to do exactly what they had planned before. India is continuing to build coal-fired power stations. Just a week after the conference the UK government approved  mining by fracking in National Parks.

To quote George Monbiot in the Guardian (http://www.theguardian.com/commentisfree/2015/dec/15/killing-planet-george-monbiot):

As the website climateparis.org explains, even if every pledge nations brought to the talks were honoured (and already governments such as the UK’s are breaking theirs), by 2030 the world will be producing more greenhouse gases than it does today. At that point we will have 14 years to reduce global emissions to zero, to stand a fair chance of preventing more than two degrees of global warming.

If the Paris agreement’s “aspirational” aim of no more than 1.5 degrees is to be achieved, other estimates suggest, carbon emissions must fall off a cliff soon after 2020. The festival of self-satisfaction with which the talks ended was a “mission accomplished” moment, a grave case of premature congratulation.

The reality is that combating climate change will only happen when the people of the world want it to happen. It would be better if humans could act out of a love of nature and a desire to protect the environment. It looks at present, however, they will only be motivated to act when disaster strikes. By then it will be too late. This is why eco-humanity is so important. We need to unite around a philosophy of life for the good of us all, to save the planet for our children.