By Roger HepplestonMarch 23, 2021economics
No Comments

In his book Utopia for Realists Rutger Bergman despairs of the lack of inspirational leadership coming from the progressive element of society. 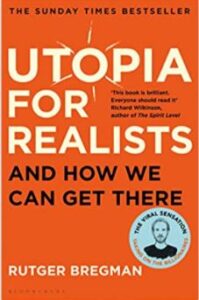 These days the left seems to have forgotten the art of Politics. Worse , many left -wing thinkers and politicians attempt to quell radical sentiments among their own rank and file in their terror of losing votes. This attitude is one I’ve begun to think of in recent years as the phenomenon of ‘underdog socialism’. .  Sadly, the underdog socialist has forgotten that the story of the left ought to be a narrative of hope and progress.

Since the 70’s neo-liberal reasoning has dominated political thinking. Despite the financial crash of 2008, progressive thinkers have presented no coherent alternative ideas that have gained general support. The only economic policy that has gained ground has resulted in a backward lurch towards the protectionist ideas of populism.

Bergman believes that progressive thinkers have failed to effectively challenge the neo-liberal economic thinking which has created tax havens, the gig economy, bloated bankers and bullshit jobs and is building a divided society which is destroying the planet. It is not sufficient to empathise with the poor or to reason and warn of the dangers ahead.  Economics provide the basic rationale for government policy. To confront the challenges ahead we need progressive thinkers to paint a coherent economic picture of the future which provides hope, motivation and encouragement to all.