Why democracy is always behind the game 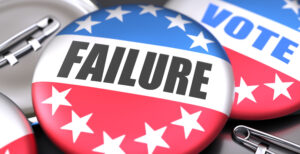 Over the past few months, we have seen a glimpse of the future direction that evolution is taking us. Catastrophic destruction of the natural world has resulted in floods, fires and pandemics. We’ve known of this potential outcome for decades. However, precious little has happened to stop it occurring.

Scientists know what needs to be done, technologies have been developed, necessary changes in lifestyle have been identified.  All that is needed is to put these new ideas into effect. Political leaders have, however, failed to react fast enough.

There appears to be a fundamental problem in democracies. They are unable to deal with future risks. Most people are overwhelmingly occupied with day-to- day problems and are naturally less concerned about the long-term. And because only popular politicians get re-elected, democratic leaders are reluctant to propose action ahead of the public consensus. Leaders who have the ability to lead public opinion and inspire the public to alter behaviour, are very rare. Social media and active programmes of disinformation do not help.

Democracies have two main functions, to govern and to represent. At present they are failing on both counts. In terms of governance, they have failed to deal with change in the natural world, resulting in climate change, pandemics, loss of biodiversity.  They have equally failed to deal with changes in the economy, resulting in an insecure workforce, massive wealth discrepancies and an abrogation of power to tech giants. In terms of representation, they have failed to connect with the public and understand how globalisation and new technologies have negatively affected lifestyles. As a consequence, we have seen the growth of the gig-economy, falling life expectancy and a massive change in wealth distribution. In many countries, including the USA and the UK, leaders have reverted to a crude appeal to nationalist sentiment, blaming foreign influence for their problems.

Across the world there is a deep crisis brewing for mankind.  Democratic governments appear unable to react fast enough to the accelerating effects of evolution. They are reacting to change rather than anticipating problems and mitigating their affects. If democracies are to survive, they have to reconsider their operational processes to allow more long-term thinking. However, no democratic government appears able to look critically at its own modus operandi. Procedures once established are rarely changed. Many of the operational rules of the House of Commons were in place three centuries ago. The USA is bound by a constitution established in the eighteenth century.

The crisis is clear. Democracy in its present form appears unable to respond.